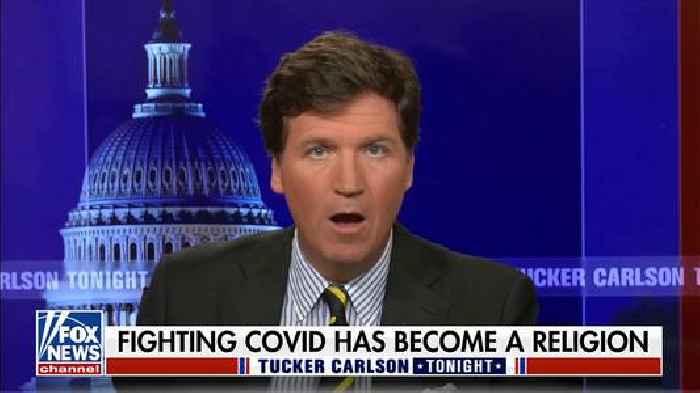 Tucker Carlson may not understand the difference between science and religion — and it’s not all that unsurprising that he doesn’t — but there definitely is a difference.

The Fox News host spent his opening segment on Monday comparing the concept of being in favor of vaccines to being religious. He mocked some random woman, naming her for his audience to hear, for buying goofy Dr. Fauci merch and leaving positive reviews about them — something that surely will not lead to any harassment whatsoever.

He also mocked President Joe Biden for getting a vaccine booster shot. No arguments were made during this segment. It was just Carlson being histrionic.

“He knows that the kingdom of corona can exist right here on Earth, and that it will endure forever. But first, everyone must convert. Every last person. This is an evangelical faith. It will be spread by the sword if necessary. Here was Joe Biden today.”

Cue a clip of Biden talking to the press while getting his shot. One reporter asked: “How many Americans need to be vaccinated for us to go back to normal?”

Biden responded: “I think we get the vast majority, like is going on in some industries and some schools. 97, 98%. I think we’re getting awfully close. But I’m not the scientist. But one thing for sure. A quarter of the country can’t go unvaccinated and us not continue to have a problem.”

Then we got the usual exaggerations from Carlson.

“There he is getting another shot. Another. Why not?” Carlson cried. “It’s not just once a year, no, not for the devout. Some people take communion every day. Joe Biden would like to see everybody on board with this program. Everyone believing wholeheartedly in this new faith. He has called for 98% of the United States of America to convert. To get those shots. One, two, three, maybe every Sunday. That’s a lot.”

A COVID-19 vaccine booster shot — an additional shot of the vaccine six months or more after receiving the initial shot or shots — has been shown to increase the immune response in trials, per the CDC.

The U.S. is currently averaging about 2,000 reported COVID deaths each day, with the absolute worse deasth and sickness rates in states run by Republicans who oppose even tepid measures to stop the spread of COVID-19.

Last year, Fox News argued in court that Tucker Carlson is not a credible source of news, and the judge in that case agreed with that assessment in her ruling.