What’s New on DVD in February: ‘Knives Out,’ ‘The Nightingale,’ ‘Paris Is Burning’ and More 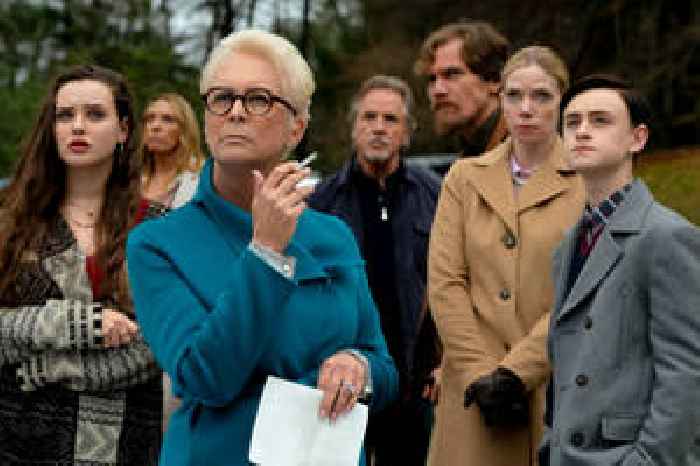 What’s New on DVD in February: ‘Knives Out,’ ‘The Nightingale,’ ‘Paris Is Burning’ and More

While I didn’t find Rian Johnson’s *“Knives Out”* (Lionsgate/MRC) as wonderful a whodunit as most audiences (and critics), I do cheer his evident love for the genre and his energy and enthusiasm in revitalizing the all-star murder mystery. (Give me a crisp new story like this over a thousand sludgy remakes like the recent “Murder on the Orient Express.”) And it’s a win for everyone when an original movie — not a sequel, not a remake, not a reboot, not an adaptation — becomes a much-talked-about hit. So let’s hear it for more fresh takes on beloved movie tropes. (And please, let’s have more movies that allow Jamie Lee Curtis to be tersely acerbic while smoking.)

If you thought U.S. Marshall Bass Reeves was something they made up for HBO’s “Watchmen,” *“Hell on the Border”* (Lionsgate) tells the true story of the legendary black lawman of the Old West; imagine David Lynch taking a spin on “Edward Scissorhands,” and you begin to get a taste of the wonderful weirdness that is *“Greener Grass”* (IFC Midnight/Scream Factory); the new Blu-ray of Lars Von Trier’s serial-killer tale *“The House That Jack Built”* (IFC Films/Scream Factory) features both the theatrical cut and director’s cut — both have infuriated audiences around the world, and now they can disturb you in the privacy of your own home.

*Watch Video:* Rian Johnson Jokes 'Knives Out' Sequel Will Go to Space Next

Director Jennifer Kent follows up the terrifying “The Babadook” with *“The Nightingale”* (IFC Films/Shout Factory), a brutal rape-revenge tale that sends its heroine to the edge of her mental and physical capabilities. After Aisling Franciosi’s Irish convict in 1825 Australia is brutalized by jailer Sam Claflin, she pursues him through the country’s most rugged terrain with the help of an Aboriginal tracker (played by Baykali Ganambarr). The two travelers despise and distrust each other, but over the course of the film must rely upon each other for survival, even as they face the brutal realities of revenge and its consequences. “The Nightingale” is a rough sit, but it displays Kent’s mastery of mood and intensity.

Also available: Physical-media collectors worried they wouldn’t get a permanent copy of some of Netflix’s higher-profile titles breathed a sigh of relief when The Criterion Collection announced it would be releasing *“Roma”* with all the wonderful cinephile bells and whistles for which the label is known; *“Another Day of Life”* (Shout Factory/GKIDS) powerfully melds documentary and animation to capture the dangers of war journalism; Aaron Kwok stars in the romantic thriller *“One Night Only”* (Cheng Cheng Films), which follows a gambler and a sex worker through the course of one evening in the Bangkok underworld.

Photographer Richard Billingham makes his directorial debut with *“Ray & Liz”* (KimStim), a drama based on the lives of the artist’s parents (who had previously been the subject of one of his most acclaimed exhibitions); a Chinese polyamorous gay couple get more than they bargained for when they get involved with a woman in *“The Taste of Betel Nut”* (Uncork’d Entertainment); Chinese animated import *“White Snake”* (Shout Factory/GKIDS) borrows from folklore and boasts stunning visuals.

*“In Full Bloom: Transcending Gender”* (First Run Features) literally pulls back the curtain on trans lives by taking us backstage to meet 13 transgender (and two cisgender gay) actors who are collaborating on the world premiere of a theatrical piece. Director Michael Brewer lets his subjects tell their stories and reflect on their own experiences, getting into topics like family acceptance, internal conflicts, coming-out, surgery and hormones and much more. With so much misinformation in the air, so much silencing and so much violence, it’s important to give this community the space to express and declare itself, and films like this go a long way in doing so.

Also available: Italian director Roberto Minervini travels to the South to examine contemporary racial issues in *“What You Gonna Do When the World’s on Fire?”* (KimStim); *“After Parkland”* (Kino Lorber) examines the legacy of Florida high-school students turned activists in the aftermath of gun violence; *“Rock & Roll Hall of Fame: In Concert” – The Blu-Ray Collection* (Time Life) boasts almost 30 hours and more than 150 performances from rock legends ranging from Bruce Springsteen to Public Enemy, recorded at induction ceremonies between 2009 and 2017.

A psychologist changes the way returning veterans are diagnosed in the poignant *“Is Anybody Listening?”* (IndiePix Films); legendary arena-rock combo *“Bad Company”* (FilmRise) celebrates its 40th anniversary with a film (produced in 2014) that combines performances with candid interviews; a visual artist becomes her own subject when she battles a cancer diagnosis in
*“Serendipity”* (Cohen Media Group).

*“16 Bars”* (Lightyear Entertainment) tells the story of Todd “Speech” Thomas of Arrested Development working with incarcerated men in Virginia on a unique music project; from alien invasions to pro-Trump propaganda, *“Scandalous: The Untold Story of the National Enquirer”* (Magnolia/CNN/AGC) tracks the evolution of the popular tabloid; a one-time model and activist flees the camera’s gaze in Beniamino Barrese’s intimate *“The Disappearance of My Mother”* (Kino Lorber).

If “Mandy” put you in the mood for more of Nicolas Cage going deep into genre, don’t miss *“Color Out of Space”* (RLJE Films), an alien-invasion tale based on a short story by H.P. Lovecraft. Directed by Richard Stanley, who’s been fairly MIA since his disastrous remake of “The Island of Dr. Moreau” — Cage later claimed he was told by a Ouija board to hire him — this Fantastic Fest-winner has been one of the most talked-about films of this relatively new year. The eclectic supporting cast includes Joely Richardson, Madeleine Arthur, Q’orianka Kilcher and Tommy Chong.

The original *“My Bloody Valentine”* (Scream Factory) gets a two-disc Blu-ray Collector’s Edition with 4K scans of both the theatrical and uncut versions, and tons of new extras; the title *“Clown Fear”* (Lionsgate) pretty much says it all, so run toward or away this one per your own phobias; Spaghetti Western *“Hudson River Massacre”* (MVD Classics) makes its Blu-ray debut; Wenzhuo Zhao reprises his role of Huang Feihong from chapters four and five of “Once Upon a Time in China” in Marco Mak’s *“Warriors of the Nation”* (Well Go USA Entertainment).

Jennie Livingston’s *“Paris Is Burning”* (The Criterion Collection) was a game-changer out of the gate (it won the Grand Jury Prize for documentaries at the 1990 Sundance Film Festival, and Todd Haynes’ “Poison” winning that same award for features that year jump-started what would become the New Queer Cinema), and it has only grown in influence and importance over the last three decades. Quoted and referenced everywhere from “Pose” to “RuPaul’s Drag Race” and beyond, this look at Harlem’s drag-ball scene — a joyous celebration of performance in the midst of Reaganomics and the AIDS epidemic — remains a powerful and life-affirming portrait of a community creating joy in the midst of chaos. And this long-overdue Criterion release (loaded with outtakes and other fascinating extras) gives it the platform it richly deserves.

Also available: If you’ve wondered why Rudolf Valentino was one of the great sex symbols of his era, a good place to start is the silent classic *“Blood and Sand”* (Kino Classics); Serge Gainsbourg’s baroque sex freakout *“Je T’Aime Moi Non Plus”* (Kino Classics) spotlights Joe Dallesandro, a great sex symbol of another era altogether; *“Underwater!”* (Warner Archive Collection) gave then-chief of RKO Pictures Howard Hughes the excuse to showcase two of his obsessions — scuba-diving and Jane Russell; Natalie Wood plays a proto-manic pixie dream girl as the kleptomaniacal *“Penelope”* (Warner Archive Collection), but the animated opening credits and title song (by John Williams and Leslie Bricusse) are among my all-time faves.

Jeff Goldblum pops up again in the ’80s *“Vibes”* (Mill Creek Entertainment), opposite Cyndi Lauper in her screen debut; Joseph Losey and playwright Harold Pinter collaborate on the taut drama *“Accident”* (Kino Lorber Studio Classics); Martin Scorsese’s trippy *“Shutter Island”* (Paramount Home Entertainment) celebrates its tenth anniversary with a 4K steelbook reissue; Kino Classics and Something Weird are collaborating on a fun, trashy series called *Forbidden Fruit: The Golden Age of the Exploitation Picture*, which kicks off this month with three releases: Vol. 1 features Kroger Babb’s notorious pregnancy drama *“Mom and Dad,”* Volume 2 has the cautionary tales *“Reefer Madness” and “Sex Madness,”* while Volume 3 whisks us off to a nudist camp for the double bill of *“Unashamed” and “Elysia: Valley of the Nude.”*

Women have been funny on TV for as long as there’s been TV, but women behind the scenes as writers, producers, creators and show-runners has been a more recent phenomenon, one that has yielded sitcoms that can already be considered classic. Two of them — *“The Unbreakable Kimmy Schmidt”* and *“The Mindy Project”* — both get complete-series releases from Mill Creek Entertainment, and they reflect the singular voices of Tina Fey and Mindy Kaling, respectively, in a way that wouldn’t have been imaginable to TV execs not that long ago.

Iron your hair, slip into a Bob Mackie creation, and jump back to the 1970s with the nostalgic compilation *“I Got You Babe: The Best of Sonny & Cher”* (Time Life); Jordan Peele takes a crack at the Rod Serling legacy with *“The Twilight Zone”: Season One* (CBS/Paramount), featuring all 12 episodes in both color and black-and-white; Mill Creek Entertainment continues its ambitious collection of the long-running Ultraman series with new releases *“Ultraman Orb: The Origins Saga”* and *“Return of Ultraman: The Complete Series.”*