Bay Area Blanketed by Eerie Orange Skies: ‘It Really Feels Like the Apocalypse’ 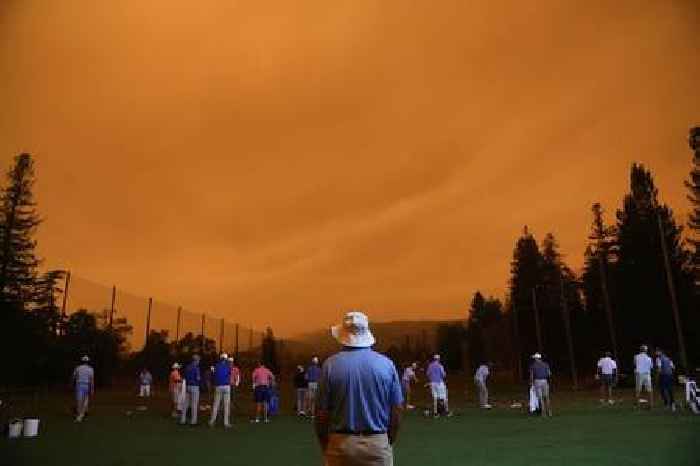 Bay Area Blanketed by Eerie Orange Skies: ‘It Really Feels Like the Apocalypse’

Bay Area residents were greeted on Wednesday with eerie orange skies and falling ash as wildfires continued to burn through the state, leading to “Blade Runner” and apocalyptic comparisons across social media.

“It really feels like the apocalypse in the #BayArea right now. Weird, dark, yellow sky, ash falling like snow, and a smell like the dying breath of our planet,” one Twitter user wrote on Wednesday morning.

“The Bay Area is in Blade Runner mode,” another Twitter user shared.

The National Weather Service for the Bay Area tweeted that the “incoming energy from the sun” was being filtered out by a “very thick multilevel smoke deck” that was covering the state, leading to cooler temperatures and the “dark dreary red-shifted skies across many areas.”

Though air quality conditions in the Bay Area remained at moderate levels, as of Wednesday morning, the NWS also warned that conditions could worsen throughout the day. “As the winds weaken aloft, gravity will take over as the primary vertical transport of the smoke. Suspended smoke will descend closer to the surface and could lead to darker skies and worsening air quality today,” the NWS tweeted.

Take a look at some of the photos of the Bay Area below:

People really don’t know what to do right now. Everyone on the Embarcadero is stopping to record the sky and chit chatting in a way I haven’t seen since pre-pandemic @sfchronicle pic.twitter.com/ueKQ4g7WTD

Sausalito with a red hue. Never seen anything like it. ⁦@nbcbayarea⁩ pic.twitter.com/pCKQkxkmd9

The Bay Area is in Blade Runner mode. I just went for a morning walk and took some pics. #SanFrancisco #SF #BayArea pic.twitter.com/Nxa9B6Ykqe

The orange skies this morning are a result of wildfire smoke in the air. Strong winds over the past few days transported ash from fires in northern California and the Sierra Nevada into the region. (1/2) pic.twitter.com/IGFVDgGLpC

'Blade Runner 2049': Everything You Need to Know About How Replicants Work