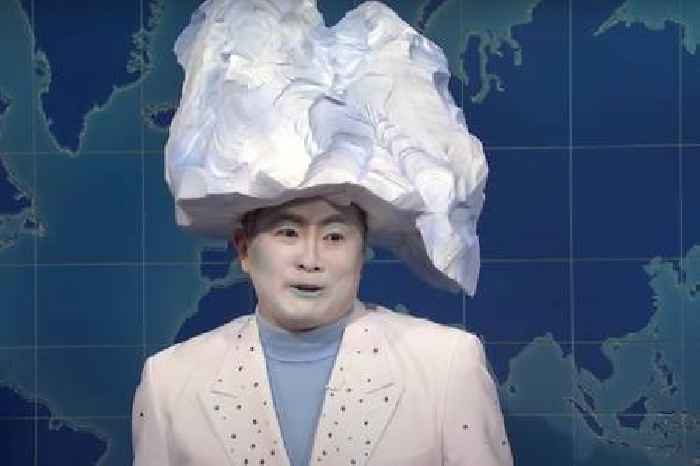 Fans are once again calling for Bowen Yang to be made a “Saturday Night Live” series regular, after a sketch this week in which he played the iceberg that sank the Titanic. Only in this version of the story, the iceberg blames the Titanic.

The bit came as part of “Weekend Update” with Colin Jost and Michael Che, to commemorate the sinking of the Titanic on April 14 and 15, 1912. Jost introduced the iceberg to tell his side of the story, at which point Yang entered in full makeup, sporting a white suit and an iceberg on his head.

“Thanks for having me. This is always a really weird time of year for me,” Yang admitted to Jost. But as Jost pushed for what the iceberg was thinking in sinking the ship, Bowen Yang’s character sidestepped the questions, calmly claiming it “was a really long time ago” and that he’s “done a lot of reflecting to try to move past it.”

“I think my publicist was very clear. We’re not here to talk about the sinking,” he tersely told Colin Jost. “I’m here to promote my album.” According to the iceberg, it’s a “hyper-pop, EDM, new disco fantasia” album, called “Music.” But according to Jost, people would rather hear about the circumstances surrounding the sinking of the iconic ship. Jost didn’t relent, and Yang’s iceberg finally cracks.

“OK, fine. You wanna do this? Let’s do this,” Bowen Yang’s iceberg said. “First of all, you came to where I live and you hit me.”

He made fun of the orchestra on the ship before angrily noting, “Before I can turn around and go like ‘what,’ half my ass is gone, which was my best feature.” As the iceberg continued, he makes an important distinction about what technically killed the passengers of the Titanic,

“What did the autopsy say, they iceberged? No. They drowned, bitch. That’s not me, that’s water.”

Don’t worry though, we did still get a taste of that upcoming album. You can watch the full “Weekend Update” segment above or click here.

Bowen Yang has stolen the spotlight and fans’ hearts after appearing as the iceberg that sunk the Titanic during Saturday Night..