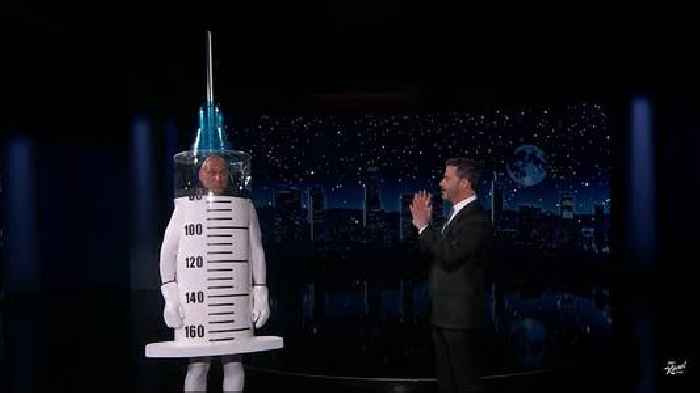 The bit came near the end of Kimmel’s Thursday night monologue, when he brought up the great news that 12 to 15-year-olds are now eligible to receive COVID-19 vaccines. Kimmel noted that this might cause anxiety since “a lot of kids are scared to get shots,” and he said that his show had created a new mascot that will encourage kids to relax about it.

Now according to the bit, Kimmel was supposed to then be joined onstage by “Maxine the Vaccine,” except that didn’t happen. Instead, a man wearing a vaccine costume came out.

“Maxine died. Yeah, she got COVID and died,” the replacement said.

“Oh my god that’s terrible. Who are you?” asked Kimmel.

Kimmel asked Scott to put kids at ease about the vaccine, and Scott offered to do it in song form — and that’s when the conspiracy stuff came out. Scott sang a song with these lyrics:

Kimmel ended the song at that and argued with Scott over the whole microchips in butts thing, pointing out that “it’s disinformation.”

“Uh it’s my opinion, you can’t tell me what my opinion is.”

Then Scott tried to rap, at which point he was dragged offscreen. Which, when you think about it, is something that ought to happen to antivaxxers and COVID-deniers too.

Watch the whole clip above.

Kimmel Jokes After Liz Cheney Ouster, 'She's Used to This, Her Dad Was a Dick Too' (Video)

Jimmy Kimmel Identifies How Caitlyn Jenner Is Most Like Trump (Video)

Hannity Claps Back at Jimmy Kimmel: No, You're the 'Ignorant Asshole' (Video)

Jimmy Kimmel is fairly convinced Donald Trump will escape any real legal consequences from the new criminal investigation into the..