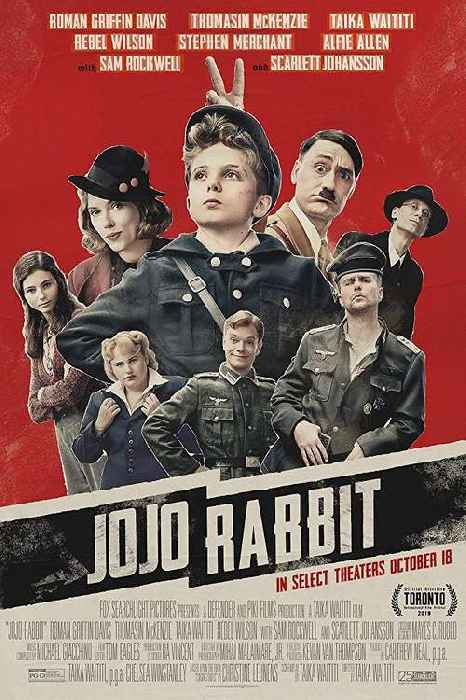 Well – isn’t this a good start to the year! I mean that with no sarcasm. Which makes a change!

Jojo Rabbit is a movie which – despite its subject matter – really deserves to be seen by all, at least once. I am already biased in that I regard Taika Waititi as one of the best filmmakers around right now (simply look at the fun he injected into the Marvel Universe) – however, it’s just not that simple to create a touching, soul-crushing, heart-warming, and honestly funny story around an impressionable young boy in the Hitler Youth. I say this with all certainty, even though I have never tried for myself.

However, there’s a little more to it than that. Jojo Rabbit has already been a big hit stateside and, at the time of writing, is still holding out for potential nods at the Oscars. There are plenty of reasons for this. Not only is Jojo Rabbit the story of a young German boy who, infatuated with Nazism, finds himself conflicted when he discovers a young Jewish girl in the hollows of his mother’s walls – it’s the story of a young boy who has Adolf Hitler as an imaginary friend.

It’s a bizarre concept, and one which – in less able hands – could have been a disaster. The story follows young Jojo (Davies) as he finds himself taken out of the Hitler Youth following over-exertion with a hand grenade. While his only friend stays in the program, Jojo only has his mother (Johansson) and his imaginary friend, Adolf Hitler (Waititi), for company. While Nazi Germany starts to struggle in the dying days of the Second World War, the impressionable, affable young Jojo earnestly clings on to the twisted beliefs the Nazi regime instilled in him – while trying to come to terms with finding a Jewish stowaway (McKenzie) in the upstairs bedroom.

Jojo Rabbit is more than just a silly film that tries to make light of Hitler’s crimes. It doesn’t even do that. It centres around Jojo, and explores the dangers of indoctrination. It shows a fascinating, growing relationship between the young recruit and the girl upstairs, while his mother and father appear to be a part of something bigger, beyond his recognition. Fascinated by the Jewish people – whom he believes are monsters – Jojo continues to wallow in the Nazi ideal, while working with two servicemen (Allen and Rockwell) who appear to be closer than just colleagues.

Waititi’s comic direction and writing is nothing short of tremendous. This difficult concept, born out of Christine Leunens’ book Caging Skies, is given moments of light-heartedness and adorability, before being wrenched away with the genuine brutality of war. One moment, Waititi hams it up as a goofy, seemingly encouraging portrait of Hitler as a ‘best friend’. The next, buildings start exploding. Jojo starts believing twisted, horrible things that viewers are desperate for him to turn against. He is just a young boy!

Rather than exploit the subject matter, Waititi offers a firm, alternative glance at a monstrous icon such as Hitler, and throws us into the daily routine of a young boy in Nazi Germany who just wants to be accepted. The characters are witty, quirky, and broken. Most are surprisingly upbeat, at times. There’s a strange sense of positivity pervading through the piece. It really isn’t difficult to get behind Jojo, and then you immediately remember the regime he’s being indoctrinated by – it can get quite uncomfortable.

This all builds to a huge turn in events towards the start of the third act, in a moment – a shot – that is so devastating, the tone shifts, and we’re forced to come to terms with how brutal war actually is. Moments of levity and spoof are gone, at least for now. The shot in question is so well-foreshadowed even I failed to pick up on it. It’s a moment of directorial mastery.

Some people, if not many, will likely find the idea of Jojo Rabbit to be a little too close to the bone. However, it’s actually a very powerful, very sensitive, and very important movie. Waititi is not making fun of the war, nor is he attempting to desensitise any of the horrible atrocities that occurred. It is a multi-layered, thoroughly entertaining piece of film-making which deserves all the plaudits it can handle.

What’s more, the casting is nigh-on perfect. Davies has a clear future in the art, while Johansson – whom some are tipping for a best supporting Oscar – has never been better. If Waititi doesn’t pick up an award for best adapted screenplay – or even best director – at least he should get some recognition for putting together one of the most affecting, effective war parables of our time. Plus – putting Rockwell and Allen together is pure genius – who would have thought this pairing could generate so much chemistry?

by Graham Pierrepoint -
2019 was a fantastic year for movies. If you’ve been keeping track of our reviews across the..