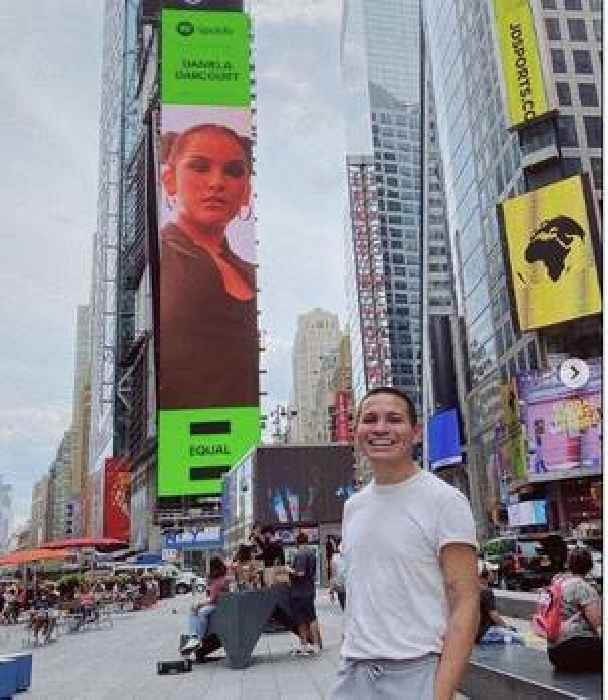 *SAN JUAN, PUERTO RICO / ACCESSWIRE / July 24, 2021 / *The bicentennial of Peruvian independence is making itself felt around the world. For the second time in less than a month, a Peruvian woman has captured the attention of millions of people on billboards in Times Square. Under the lens of Giuseppe Falla, this time it is the young salsa singer, Daniela Darcourt. Her face is projected on the cover of the Spotify billboard in the center of New York advertising late last week.

However, what really impacted passersby in the Big Apple and millions of Peruvians who followed the news closely was not only the playlist of the famous streaming platform, but the powerful image projected by the singer in her photograph. The photograph of Daniela that is shown in the media today was taken by the young photography prodigy in Peru, Giuseppe Falla.

*Giuseppe Falla is Projected as the Next Mario Testino*
In his seven-year professional career, Giuseppe has mastered different styles of photography, which is why he is considered an extremely versatile professional. However, his current specialization is portraits and documentary photography, which has allowed him access to the highest spheres of show business in the region.

"I try to be minimalist in my productions. I believe a lot in less is more", says Giuseppe in regard to his own style.

Despite his young age, Giuseppe has managed to stand out and be recognized as one of the most influential photographers in Peru. He has also shown great potential for international collaboration, especially with Argentina, Mexico and the United States, where he has recently collaborated on very important projects.

His recognition has not stopped growing and in the artistic world, he is nicknamed, less and less shyly, as "the next Mario Testino." According to Vogue Magazine, Testino is the most relevant photographer of the last 20 years, and also a native of Peru and currently part of the London royalty. A modest appellation, but won by dint of talent and work for the talented young Falla.

*Giuseppe's Art Conquers Times Square*
It all started on June 24, when Giuseppe managed to enchant Times Square for the first time with his work for the telenovela, Dos Hermanas de América TV, with Del Barrio Producciones and Latino Wall Street. We remember the famous photograph of Giuseppe, which showed the protagonists of the telenovela Mayella Lloclla and Melissa Paredes along with Gabriela and Karinna Berrospi. Coincidentally, they bear the same surname as the novel in real life.

Giuseppe's most recent collaboration with Daniela Dacourt and her Spotify initiative #EQUAL, a playlist that seeks to encourage the inclusion and empowerment of all women in Latin America, has allowed Giuseppe to bring his work back to the famous billboards of Nueva York just a month later.

*Next Steps*
Giuseppe is already famous for having photographed the most important models and figures from the entertainment industry in Peru, which makes us think that his next successes will come from abroad, in projects like the ones we have seen recently. It is very likely that in the near future, we will see more of Giuseppe's work exhibited in spaces of global importance, such as Times Square.

Which famous figure will be the next to pose under his lens in the Big Apple?