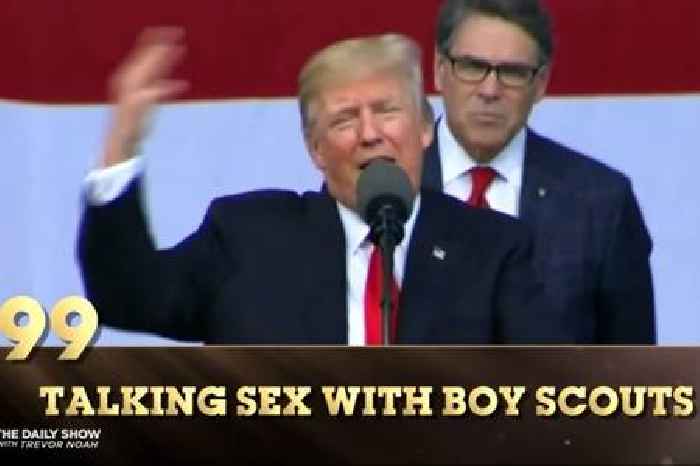 On Thursday, you might have been watching the second and final (thank goodness) 2020 Joe Biden-Donald Trump presidential debate, and you probably came away slightly exhausted by uh, at least one of the two candidates.

Now “The Daily” show didn’t cover the debate, but it did whip up some apropos content in the form of a new 4-part segment narrated by Roy Wood Jr. commemorating the looming end of Trump’s first (and maybe only?) term in office with a list of the top 100 scandals of Trump’s first term. Yes, 100.

“Scandals. Every president had one. But while most presidents are only known for one big scandal, Donald Trump has truly changed the game,” Wood says in his introduction. Wood continued, saying that over the segment’s four parts, “we’re gonna celebrate them all. The ones you forgot, and the ones you wish you could.”

And so began the countdown of the first 25 of “Donald Trump’s 100 Most Tremendous Scandals.” Of course, we’ll concede some of the things on this list aren’t scandals so much as just really weird and disturbing things Trump has done since becoming president. And we’d probably rank a few items (like the Post Office entry) a bit higher. But you can judge for yourself in the clip above.

Of course, if you’re unable to watch, we’ve listed them off in full for your convenience below. And in case you’re wondering, yes, they’re all true, and we’ve included the links to prove it.

And for #76, “The Daily Show” took a deep look at one of the more serious scandals of the Trump years: How he has apparently enriched himself by funneling campaign or government money to his businesses. This includes bilking the Secret Service for hundreds of thousands of dollars and blatantly lying about, as well as massive, unconstitutional conflicts of interests.

On Monday “The Daily Show” kicked off the last week before election day 2020 with the second installment of its 4-part series,..

Second wave will be 'weeks and months' of limiting contacts, but Trudeau says 'blunt' lockdowns unnecessary

This ranking of the Top 50 film schools of 2020 first appeared in TheWrap’s fifth annual College Issue.