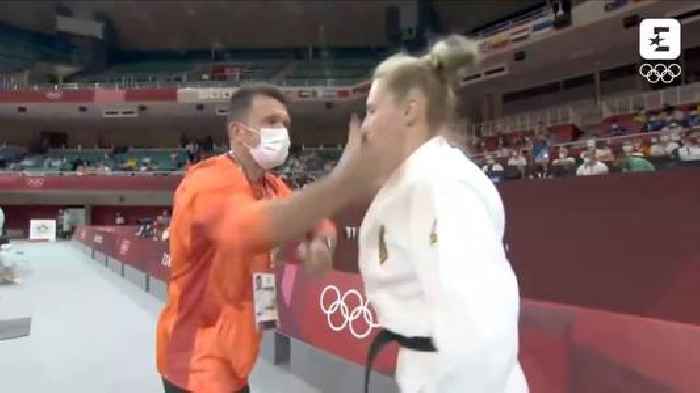 A video of German Olympic Judo fighter Martyna Trajdos being slapped in the face and shaken about by a coach before her match at the Olympic Games in Tokyo made waves online Tuesday, but Trajdos said that the entire incident was intentional.

While people online were quick to assume this was some kind of abusive, or unwanted gesture from the coach, Trajdos said the truth couldn't be farther from that. In an Instagram post about the now-viral clip, Trajdos said she actually asked the coach to do that to psych her up before the fight.

The 32-year-old judoka said, "Look’s like this was not hard enough! I wish I could have made a different headline today. As I already said that’s the ritual which I chose pre competition ! My coach is just doing what I want him to do to fire me up!"

Trajados later doubled down on defense of her coach after criticism came flying at him from all corners of the internet, and added on her Instagram stories, "This is what I asked my coach to do so please don't blame him. I need this before my fights to be awake."

Trajdos is a Polish-born German judo competitor who lives in Cologne. She has been fighting on the world stage in the -63kg division for years, including at the 2016 Olympic Games in Rio de Janiero, where she was knocked out in the second round. Trajdos also took home a gold medal in the 2015 European Championships and a bronze medal in the European Judo World Championships last year.

Unfortunately Trajdos might have needed to be a little more hyped up, as she was later taken out of the competition in an elimination round before the quarter-finals after losing a bout to Hungarian Judo competitor Sophie Ozbas.

Even though Trajdos told the world she wanted the slapping incident to happen, people couldn't resist cracking jokes about it online -- and some fans of other sports teams hilariously implied that the German judo coach should be given a job slapping up other sports teams' competitors in order to make them do better.

A fan who roots for U.K.-based soccer team Arsenal F.C. re-posted the clip and said it is "what I'd like to do to my favorite Football club sometimes..."

Check out the original clip -- and some reactions to it -- below.

What the hell is going on at the Olympics!? https://t.co/KJUR3esktW

Honestly? There are times when I'd take a professional slapper to wake me up for certain moments. If this is what she wants? Good for her. https://t.co/Ww4qmO2OkG

Can someone come to my house Friday morning and do this to me to wake me up for our #canwnt match?
(To clarify, she asks her coach to do this to wake her up before her fight.) https://t.co/wuLblL3hyy

You may not know it, but this is also how the Ontario Press Gallery gets ready for newsers. @ColinDMello and especially @jm_mcgrath would shake and smack me in the face just like this when I was there.

What I'd like to do to my favorite Football club sometimes... https://t.co/31XllTr0lv

The Holy Spirit before I go into the Confessional. https://t.co/1LuZsMjKt0

As long as there's a safe word it's none of our business.

Jesus Christ people. It’s Judo where picking up your opponent and pile driven them into the mat is perfectly legal. They rip out their fingernails trying to execute throws by gripping the garment (judoka). You have no conception. her coach is getting her ready for her match.

ITS NORMAL RELAX. Im a combat sport coach in France. specializing in Greco Roman. We do it all the time even with our 6-U kids. My old coach would suckered punch me in groin if I wasn't paying attention. Your Baseball coaches in US grab players DERRIERE. Settle Down

That’s the Olympic version of the movie WHIPLASH

This is me and @carlyderms, when I need motivation to get back into online dating.