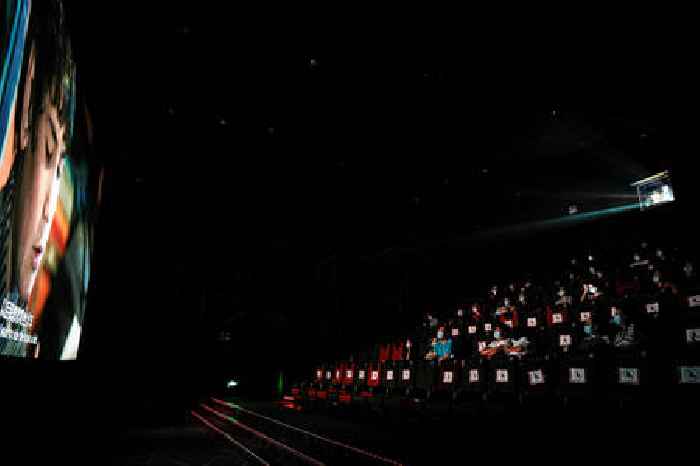 Hollywood has resigned itself to forgo releasing new movies in theaters (for now), instead rolling out shelved wares overseas in markets where the novel coronavirus pandemic is more under control.

One sign of promising demand came Tuesday from Imax, which pulls roughly 70% of its overall revenue from outside of the U.S. The large-format theater exhibitor has reopened 624 of its theaters globally, or approximately 40% of its network, including 409 theaters in China over the July 24 weekend, CEO Rich Gelfond said Tuesday.

“Over the weekend in China, ‘Dolittle’ and ‘Bloodshot’ earned $750,000 on Imax screens, despite playing in only 40% of the company’s Chinese theaters with a 30% capacity limitation and reduced ticket prices,” the company said Tuesday. “We project that approximately 1,400 screens in 70 markets, or 90% of our global network, will open by the end of August.”

Reopening theaters and getting the moviegoing business up and running again has proven difficult for studios and exhibitors, particularly in the U.S., where cases of COVID-19 continue to spike in many key markets.

On Monday, Warner Bros. committed to releasing Christopher Nolan’s highly anticipated big-screen spectacle “Tenet” in more than 70 countries worldwide ahead of the U.S. The film will open starting Aug. 26 in international territories, including Australia, Canada, France, Germany, Italy, Japan, Korea, Russia, Spain and the U.K. It will open in the U.S. over Labor Day weekend in select cities. But that decision followed months of uncertainty and three announced delays in a release date.

In South Korea, theaters have been able to successfully reopen and even produced a genuine box office hit: “Peninsula,” the blockbuster sequel to 2016’s “Train to Busan,” has grossed more than $21 million in the country since its July 15 release. “That’s a case where a successful domestic title on the market can make a real impact,” Boxoffice Pro Editorial Director Daniel Loria said.

*Also Read:* Christopher Nolan's 'Tenet' Will Not Skip Theaters for HBO Max Debut - But Other Movies Could

“‘Peninsula’ continues to perform well across markets in Asia and Europe, drawing $26.5 million in global box office despite capacity limitations and highlighting solid demand among moviegoers in lower-risk markets worldwide,” Gelfond said in a statement on Imax’s second quarter earnings. “”We are seeing early signs of progress, with approximately 40% of our global network currently generating revenue… We believe that our solid financial position gives IMAX the strength to be ready as the rest of our network comes back online.”

On the other end of the overseas theatrical spectrum, however, French theaters have struggled since reopening in June. The French Cinema Federation has called on the government to provide additional aid the cinema sector.

“Theaters there were allowed to reopen on June 22 and are hoping the influx of studio product helps their cause a bit,” Loria said. “Admissions from repertory titles and domestic films haven’t been able to keep Paris’s iconic Grand Rex open — it’s closing temporarily through much of August. Complicating things further is a creeping number of domestic films in France now opting for a VOD release instead of hitting theaters at reduced capacity.”

Gelfond assured analysts that theaters can operate successfully at 50% capacity or below, noting that Imax’s average global capacity was roughly 10% in 2019, when the company set a new box office record. Of course, a lot is still riding on whether people will feel comfortable enough to head back to theaters (signs point to yes) and whether major studio releases will draw moviegoers back to the theater, even at more limited capacity — as “Pennisula” has done for South Korea.

According to the British Film Institute, the top 15 films at the box office during the July 17 to July 19 weekend (the most recent available) grossed more than $300,000. None of the films in the top 15 was a major release, most being library titles.

“In terms of performance, without studio reporting we’re somewhat limited in what we’ve been able to track,” Loria said. “Business in the U.K. seems to be picking up, however — looking at increasing location counts, as opposed to gross — since the market reopened.”

'Tenet' Could Lose Money But Still Be Vital for Hollywood

Why Warner Bros. Should Reconsider Releasing 'Tenet' for Streaming on HBO Max