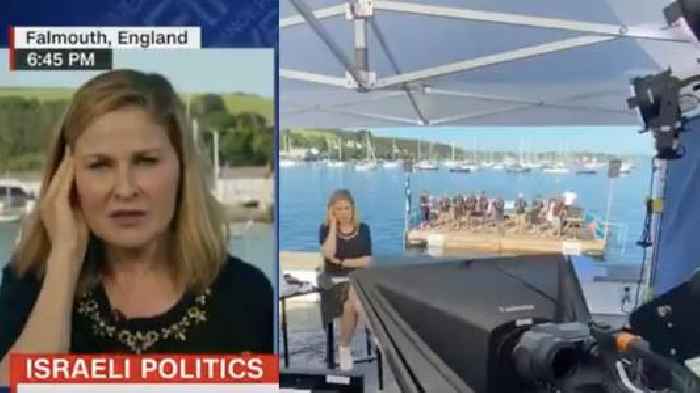 CNN International anchor Hala Gorani was interrupted during a live broadcast Sunday as sea-faring singers drowned out the sound of her voice.

“When you’re anchoring the Israeli Knesset confidence vote and a traditional a capella sea shanty singing barge floats past your location,” the journalist captioned a behind-the-scenes video of the moment on Twitter.

In the clip, Gorani is sitting at an outdoor set as a barge full of men passes by. Their harmonious singing overwhelms the news network’s audio and Gorani sits with one hand to her earpiece, trying to talk over the song.

“I hardly know your name,” they warble. “Well, well, well, maybe some sweet day, love will come your way. Your name and mine will be the same forever.”

Fittingly, their lyrics go on to reference a riverside as their vessel floats behind the anchor.

Later in the day, Gorani posted another clip that showed how the moment played out on television. In that one, a correspondent attempts to toss to Gorani, who can’t be heard over the singing. The shot switches to an in-studio anchor who looks a little perplexed.

“I understand the vote is underway… Again, apologies,” says Gorani. “There’s an a capella — a wonderfully harmonious group of a capella singers — behind me, so apologies for our viewers if there’s a few audio issues…”

And how it played out on live TV… pic.twitter.com/ttScjkDkpQ